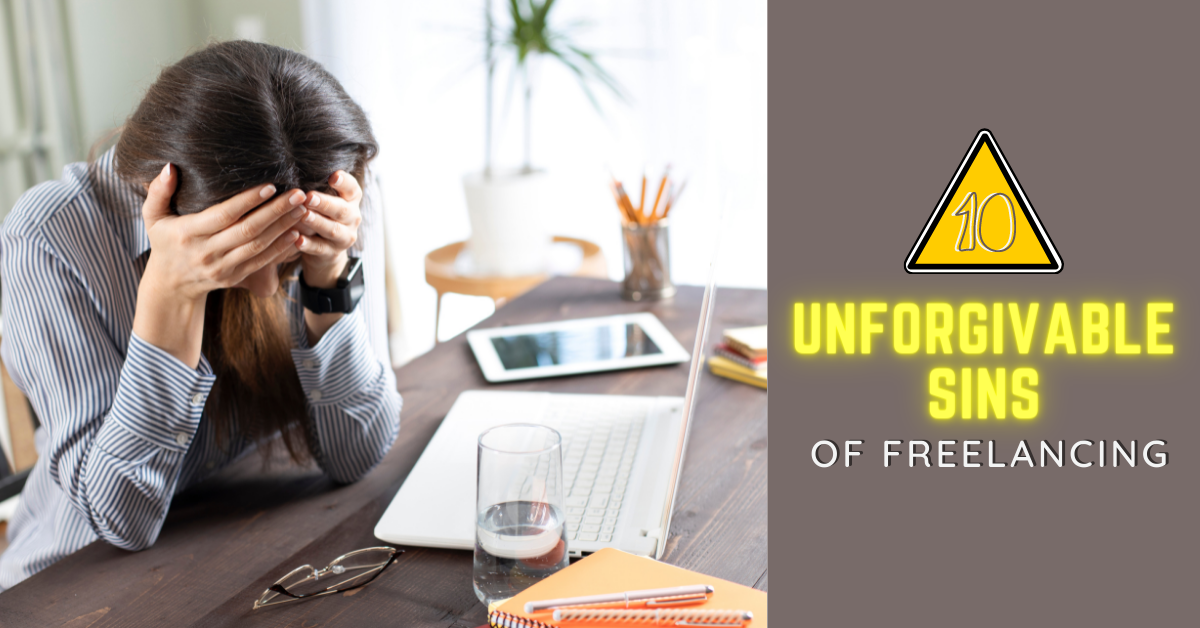 As you enter the world of freelancing, there’s a lot to learn! And while mistakes are bound to happen, and you will hopefully learn from them, there are some things that are just not acceptable as a freelancer, and we introduce ten such sins in detail below.

Arguing with your clients

No matter the situation you find yourself in, you shouldn’t argue with your clients. If you find yourself in a disagreement, do everything you can to resolve it amicably without falling out. After all, nothing good can come of an argument, and it will make you look bad. Once the immediate situation is resolved, move on and don’t work with that client again. There are plenty more fish in the freelancing sea!

As a freelancer, you should do your utmost to deliver your projects on time. While you might have a justifiable reason for delivering late once in a while, don’t make a habit out of it. Not only is it disrespectful to deliver late, but you’re also breaching the terms of your service. If you’ve agreed on a date to deliver a project, do everything you can to ensure it’s with your client as and when they’re expecting it.

Not responding to messages

Manners cost nothing in the world, and responding to messages is an act of common decency. Even if you have no intention of taking on a particular project, just be straight with the client and tell them that you’re unavailable. At least that way, they know where they stand and will be able to look elsewhere. Ignoring them and refusing to respond to their messages is unacceptable.

While you shouldn’t pay attention to criticism, feedback from your clients is a valuable gift. If you hear the same thing from your clients on more than one occasion, the chances are that it’s true, and you should probably do something about it. Ignoring feedback because you don’t agree with it will only hurt your chances of success in the long run.

When you take on a project, it’s necessary to stipulate how many revisions your client is entitled to. In some cases, you will need to tweak the order slightly to ensure it meets their expectations. While we don’t advocate unlimited revisions, offering your clients one or two is the decent thing to do, and it gives you the best chance of impressing them. After all, putting a mistake or a miscommunication right is better than leaving it unsolved.

Over promising & under delivering

Every freelancer has their limitations. And when you’ve done a few gigs, you should have a pretty good idea of what you can and can’t deliver. As such, avoid making promises that you know you can’t keep. It’s much better to be upfront with your clients and manage their expectations from the outset. If you think one of your clients is being unreasonable with what they expect from you, make sure you iron things out before you agree to take on the project.

You will probably get to the stage in your freelancing career where you hit a brick wall and can’t seem to go any further. This stagnation will see your standards slip and will cause you to lose clients. If you feel like you’ve reached a plateau and can’t go any further, consider changing things up and trying something different. The last thing you want is for your clients to ditch you because they’re unhappy with your output.

Unfortunately, there are some people out there that decide to leave negative feedback to be spiteful or in retaliation for a perceived slight. Unjust negative feedback doesn’t serve anyone – it reflects badly on the person that leaves it, and it affects the ratings of the person who receives it. It’s always better to try and iron out any issues you have with a client before the feedback stage and try not to let your emotions get the better of you when it comes to leaving a review about your experience.

As the saying goes, failing to plan is planning to fail. While you won’t get everything right as a freelancer, make sure you plan your projects well in advance, so you know what is expected of you and when. Disorganized freelancers don’t get very far, as there are only so many times you can miss deadlines before your clients look elsewhere.

Something that happens a lot in the freelancing world is ghosting. This is where you (or indeed your client) seemingly disappears off the face of the earth after your initial exchanges. There are several reasons why people ghost clients or freelancers, but there’s really no need for it. A simple message informing your client that you’re no longer interested in working with them is the least they deserve. Being ghosted is not nice, so don’t inflict it upon others.

While it might seem a little extreme to brandish these as ‘unforgiveable sins,’ we’re serious when we say that they could jeopardize your success as a freelancer. Try and be as forthright and open as you can in your dealings as a freelancer, and you have the best chance of developing a successful career for yourself.

RadialHub is an open platform driven by the will to empower YOU to aspire and take control of your time, ergo : your life.
26 Jan 2022

As you transition from a full-time role into life as a freelancer, you will undoubtedly have a heap of unanswered

Tutoring is a super popular way to earn money as a freelancer. And the good news is that you can

10 Signs That Indicate You Are Ready as a Freelancer

No Thoughts on 10 Unforgivable Sins of Freelancing